skip to main | skip to sidebar

There are many things I'd like to get done this month. I'm hoping to average at least 2 tops a week. Granted most of these are either ready to go blocks that just need sashing and bordering, but the ones I need to start from scratch will be easy patterns- most likely either rail fence or double 4 patch or yellow brick road. All will be for sale at the craft fair. What doesn't get sold at that will go to sell at church and 3rd try will be work.

Quilts-
Tablerunners I'd like to do:
Essentially if I'm not at work or sleeping, I am at my sewing desk. We got new batteries for the camera, so I will take pics as I progress.

I realized this morning that I have gotten quite a lot done in the last few weeks. Since August 1 I have gotten the following tops ready for tirane to quilt...

6 "I Spy", "Little Amish", and "Papa Amish". Today I will put the finishing touches on the borders of the Christmas Slice and Dice and the Sunflowers Tablerunners. We have our sewing circle at her house on Saturday and I am gonna try to finish up the border for the Christmas Disappearing 9-patch before then or while I'm there.

There are still a few days left in the month after that and I'm going to try to get borders onto "Fall Sampler #1".

Thanks to your ideas and some thoughts from her I have a plan now to finish "For the Birds". That will be the first project for October.
Posted by Babs at 7:11 AM No comments:

This is what I did with the Bird Fabric and scraps from Patty. 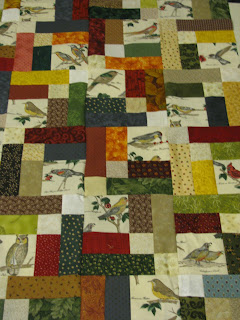 Here is a close up 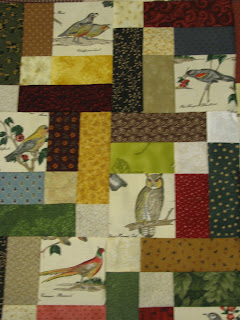 I need your opinions please. Currently it is 32x48.

Considering that I am out of the bird fabric and have limited pieces of the scraps, what would you do? I was thinking of adding some blocks to either side width ways but am not sure what blocks to use. I thought about trees or flying geese or stars of some sort.

This is something I will sell. My boss is a quilter and she suggested I use 4 blocks as a tablerunner and 2 as pillows. I'm not sure I like that idea.

What would you do?

1 down, several to go 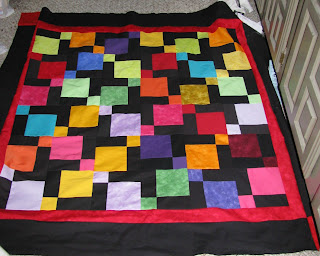 I've got to figure out a space to take better pictures. This is "Little Amish". I am horrible at math and ended up having to add red cornerstones. But I think it will look marvelous once tirane gets a hold of it.

OK, I have one more day off tomorrow from this medical leave. Tops are ready, fabrics are washed and ready to be cut into strips. I am going to do nothing tomorrow but make borders!

These are in my stack for borders. We'll see how many I get done.
Last night and this morning I got the Christmas 9 patches pressed, quartered, put back together and into a top.

This afternoon I have been making more blocks needed for my "Stitched Scraps" quilt. I had 60 blocks from the swaps, but if I make 20 more, this will be a nice queen size.

I promise pictures tomorrow!
Posted by Babs at 3:06 PM No comments:

well, today is the anniversary of 9/11. It is also my 9th wedding anniversary.

The morning of 9/11 I was at work. I work at a child care center. At that time, I was the Assistant Director of the school. One of our parents called and asked if I had heard the news, and to turn on a TV that wasn't around any of the kids. We took a small TV into the kitchen and the cook and I stood there in shock and watched the repeat of the first tower falling. Then all of a sudden the 2nd one was hit.

Parents started calling. Many came and got their kids and took them home. We tried really hard not to alarm the kids that anything was happening. It was business as close to normal as we could.

That afternoon when the older kids came in from school, several of them were talking about it. Their teachers had let them watch the news all day. I don't agree that kids that young should watch that sort of news. We took aside the kids that had watched it and had a long conversation about it. They didn't understand what had happened. It was hard to talk about it, because I didn't understand it either. Still don't to some extent.

My husband and I had planned to go out to dinner that night, but instead we stayed home, ordered pizza and watched the news. I don't mean to make light of it, but he now knows he has no excuse to forget our Anniversary date.

Now back to regularly scheduled quilting.
Posted by Babs at 7:03 AM No comments:

Here is a sneak peek at one of my next projects. Patty gave me these birds. 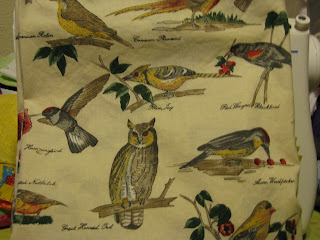 And also these scraps. 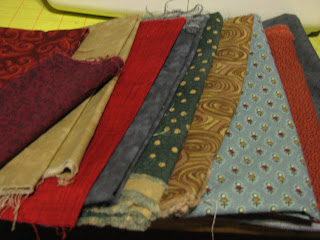 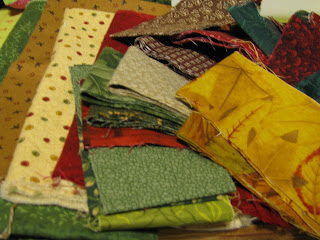 What pattern do you think I'm doing with them? If someone guesses right, I'll send you a prize!
Posted by Babs at 3:00 PM 2 comments: 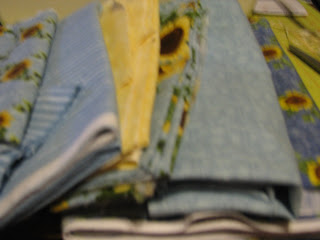 OK, here are some pics!

This is the pile of JoAnn's fabrics I had to work with. I also had a small bit of the large focus print in a tan background. I pulled out one of my favorite creams, a bright yellow, and a nice leafy green to accent with.

So far I've started 2 Tablerunners with these fabrics. This simple one uses the bit of brown focus fabric that I had. I thought the green looked like leaves. The background is a cream, not white. 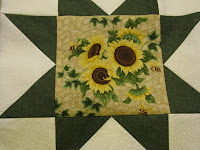 Here is that top so far. I need border ideas but I was thinking of a small skinny trim of a brown and then the pale yellow. and backing it in tan?

Then here is a block from the other runner. 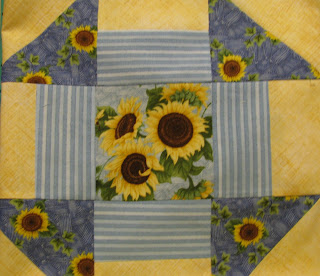 And here's what it looks like so far. I think I'm going to add a small border of green and then the darker blue for the outer border and backing. The background is more yellow that what the picture shows.

With the rest of the fabric I may do some placemats and flip-flopped coasters.

Well last weekend I started chain piecing squares and ended up with 4 "I Spy" quilts that are very boy-ish.

Then I started having serious medical issues. I won't go into all the details, but if you read this, please keep me in your thoughts and prayers. I am undergoing lots of tests and going to several different doctors. I've been having serious dizzy spells and so far have found out I have low blood pressure, low pulse rate, and a low sodium level. They also found a small spot on my brain. So next week I have to have an Open MRI and a complete Cardiac checkup including a stress test. I'm not looking forward to any of it.

In the meanwhile, I sew when I can see straight. Today I'm working on a Tablerunner made of Sunflowers fabric. Nice and cheery which is just what I need. I think this weekend I want to play with my brights. No dark, dreary fabrics for me right now.
Posted by Babs at 5:45 PM 5 comments:

Babs
I've been quilting for about 10 years. I love making bright, happy quilts and scrappy quilts.