skip to main | skip to sidebar

I made this top in 2002. I don't remember which magazine the pattern was in,
but it's the 2nd top I ever made. I pulled it out recently and added the borders
and tirane did a wonderful job in quilting it. 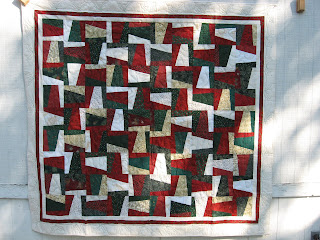 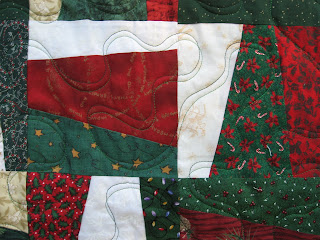 Typically I let her do whatever she wants as far as designs, but to me this screamed for some Holly leaves and vines in the border. I'm glad she designed this....it's perfect! 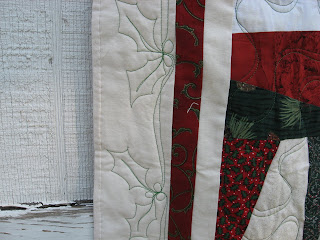 Over the years of collecting novelty fabrics for "I Spy" quilts, I realized I had a growing stack of Cat charms. So I made "Got Cats?". I want to show off what my wonderful quilter tirane did 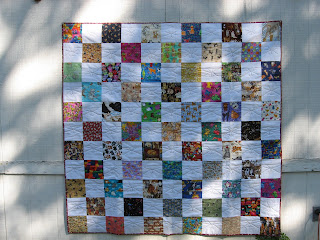 I love these sleeping cat faces. They are perfect! 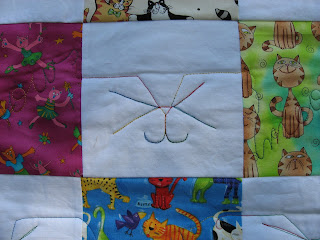 And what she "wrote" across each print! 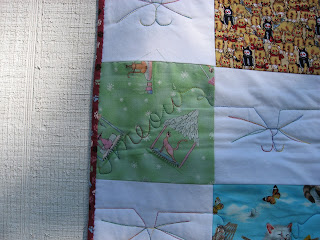 Here is a master list of all the "big" things that will be ready for the fair. Most of these are things I have finished just this year! I don't think I left anything out.

Now I am concentrating on "small" stuff- coasters, pillowcases, potholders, and maybe some Aprons and some small bags. Stuff that does not necessarily need quilting.
Posted by Babs at 2:24 PM 3 comments:

I pieced another runner this weekend. I think this will be the last of them for this fair.

I saw this as a quilt in a magazine recently and thought I'd do it on a smaller scale. 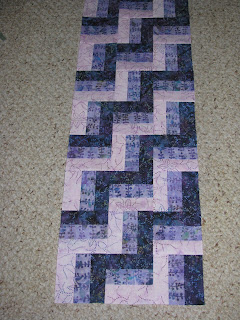 I started on the paper pieced coasters I'm doing. I got a whole set of these done. 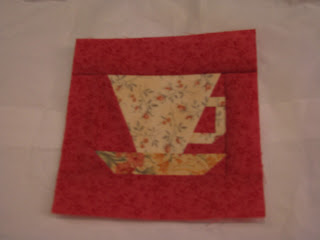 I am not a fan of florals but was given some large scraps and each of them is enough to do a set. The pattern is from Carol Doak's 300 book. They actually go together pretty fast once you get going. I did the whole set in less than an hour. I wonder how many sets I can crank out? I'm doing teacups, coffee mugs, and possibly some log cabins and other scrappy ones.

I stayed up late last night. This fabric 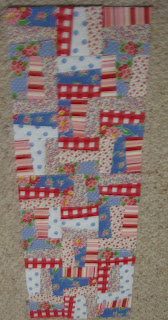 Here is a closeup 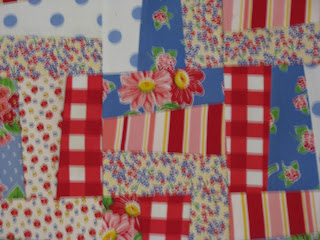 Sorry the picture's fuzzy, it was late. This runner is almost finished. It just needs a wide white border that tirane can scallop for me.

I've been under the weather this week but have managed to get several easy tablerunners made. A huge thanks to tirane for giving me the idea when I couldn't figure out what to do with the Sunflowers fabric.

Here is the Bright Sunflowers Tablerunner 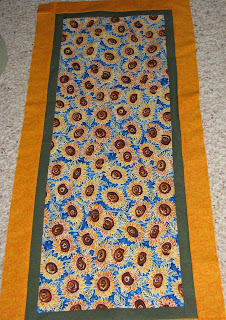 And here is one made with this fabric. 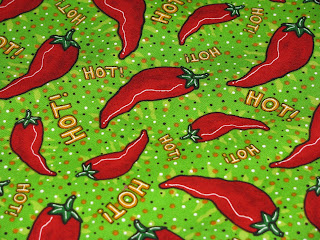 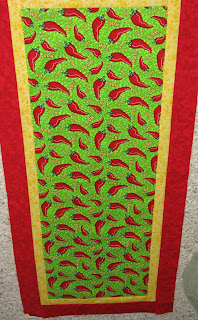 I realized the pictures cut off the ends, but there really are 2 strips on each end. Promise!

I have several more yards of the chili peppers and found an apron pattern that I'm going to try making with it and some other salsa and food fabrics.

I have 4 runners made in this style so far with some other focus fabrics picked out. Just having a hard time matching up the border colors.

Think before you sew

I had all the Texas Tech fabrics cut. I went to Hancock's and got the red and the black and made the 4 patches. I started to sew them together and realized the reds clash. BADLY! So there will not be a TT quilt in time for the fair and I will find something else to do with 42 red/black 4 patches.
Posted by Babs at 7:23 AM 3 comments:

We interupt this sewing for an update...

Updating my health---I am still having dizzy spells even after the cardiologist upped my medication to take it every day. She called me the other day to see if I was still having problems. I said yes, but not as bad, and she's referred me to an Electrophysiologist. I've never heard of such a doctor. Right now I'm hooked up to a monitor that is recording my heart rate and such. I will be undergoing another series of tests sometime next week. I just hope they finally figure out what's going on. In doing some research it sounds like I may end up with a pacemaker. We'll see.

Work is going pretty well. Today marks 11 years I've worked at The Village School. Just noticed the website needs updating. I've been through several positions there, but it has been neat watching children who were infants when I started grow up to be the rambunctious pre-teens they are now.

The diet and exercise plan have been at a stalemate with all this medical stuff going on. I had gained back a few pounds and have now lost them and am trying to maintain and at least not gain any back again. When we figure out what's going on, I will get my butt back in gear.

And this afternoon I am going to the salon for a long needed new look! This stringy flat mop will be gone! 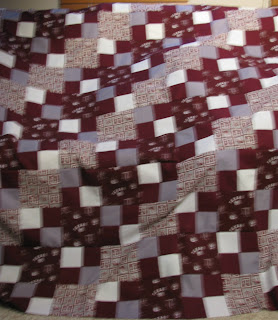 Here is the Texas A&M Double 4-patch. It's hard to tell what is on the fabrics,
so here is a closeup 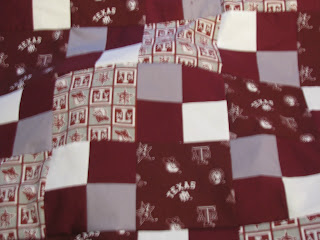 OK, the craft Fair is in 7 weeks. I've got at least 10 "I Spy", 2 small Texas A&M, 1 University of Texas twin size or so, a Purple & White twin size sampler, a queen size sampler, and a couple of other assorted kids quilts. I want to finish this Texas A&M top, another Texas, and a Texas Tech.

tirane has the 2 Amish, and the 2 Christmas. I'm probably leaving other stuff out.

I think I can have these college tops done within the next week. I was going to keep making tops through the end of the month and then have 3 weeks to make the smaller stuff, but after talking to several non-quilty friends, they think I need to go ahead and start concentrating on the smaller stuff that might be more likely to sell.

There are 4 tablerunners already done or at Tirane's. So after I get these college tops done, I'm going to spend a week making as many Tablerunners as I can. I think I'm going to incorporate some blocks already made into some of them so that should help with time. It shouldn't take long to add borders around 3 or 4 blocks.

Then I have the coffee cup, teacup, and other paper pieced coasters I want to make. And some pillowcases, and I really want to branch out and try to get a couple of purses/bags made. And the stockings. At the last minute I can throw together some of the fold & flip coasters.

The latest "Easy Quilts" by Fons & Porter has a really easy pattern for a Gift Card/money holder. Those would be easy to make and might be something people would buy on impulse. small ornaments.

Then there's the dilemna on what to price everything! I'll think about that later.

Over the next few weeks I'll try to post pictures of these quilts that I haven't posted before. 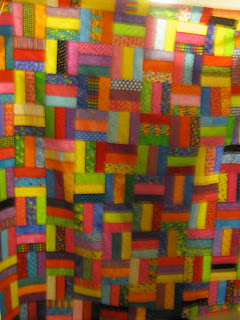 I finished this Sunday afternoon. The picture doesn't do it justice. It is very bright and very scrappy. Most fabrics used had either polka dots or stars. I am sending this one to my friend Michelle for quilting, and then it will go in the stack of quilts for sale. It is 60x72

Last night I got most of the fabrics cut for another Texas A&M quilt. Hope to get some of it sewn tonight.
Posted by Babs at 4:23 PM 2 comments:

Fall is in the Air

The playground at the school has these huge old oak trees. The leaves are just starting to turn colors and fall off. There is a crispness in the air early in the morning before the temp goes to the 80's. And I just put the finishing touches on this: 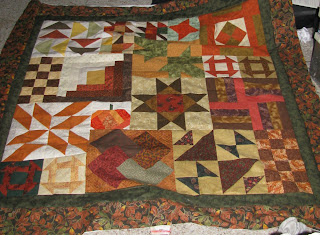 I like this so much that I may keep it for myself and not sell it. Fall is my favorite season even though it reeks havoc on my allergies.
Posted by Babs at 2:09 PM 5 comments:

I stayed up a little later than usual last night and finished this. Here is "Got Cats?" My friend tirane will put something really cat cutesy in the white squares I'm sure. It is 66x66. 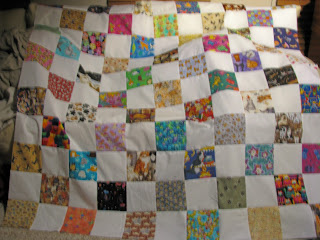 I also missed 1 quilt on the October Goals list. I forgot about these 2 1/2 inch bright strips I've been cutting for a rail fence. So I'm adding it to the list.
Posted by Babs at 7:22 AM 1 comment:

Babs
I've been quilting for about 10 years. I love making bright, happy quilts and scrappy quilts.